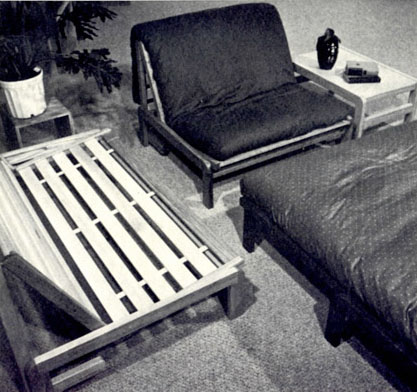 The Japanese invented and perfected the original futon mattress for sleeping. But a Cambridge woodworker invented the world's first futon sofa bed. And then Bedworks created the first layered foam-and-cotton futon mattresses for these new sofa beds.

One day in 1982, Brouwer had a brainstorm: He knew futon mattresses are flexible: the Japanese roll them up every morning. If futons are flexible like a piece of paper, then folding them into sofabeds is simple origami.

Brouwer hinged a double bed width-ways in three clever pieces. Voila! Brouwer had devised the folding futon sofabed! Brouwer had his woodshop and home at 9 Montague St., 400 yds. down Western Ave. from Bedworks.